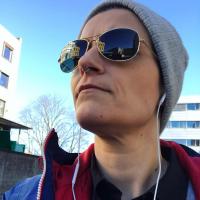 Alexandra became fascinated by computers when her mom bought a DOS box in 1988, and became properly hooked in 1994 when she discovered Linux and the internet. She started toying with web sites before CSS, made her first open source contributions to KDE in 2007, and keeps failing at programming.

She got side-tracked in her twenties, and spent 10 years living big drama on opera stages. Now she makes trouble at Ardoq, is the founder of the Rails Girls chapter in Oslo, and a Web Rebel in training.